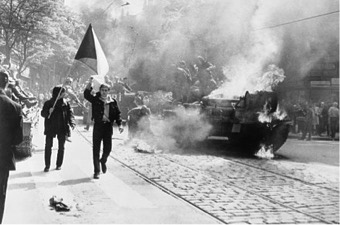 On 21st August 2018 the BCSA will commemorate the 50th anniversary of one of the most shocking events in recent Czech and Slovak history: the invasion of Dubček´s Czechoslovakia by Warsaw Treaty troops.

London is still full of people who remember the day well. Czech and Slovak students rushed to make use of the unprecedented freedom of travel to the West that summer and Britain was one of the most popular destinations.  After 21st August they were stranded here – and quite a few remain here today.

Likewise, some British visitors to Czechoslovakia came suddenly face to face with tanks and armed foreign soldiers on the street and the memory stayed with them for the rest of their lives.

So, come and join us to share your memories or simply listen to others doing so. Published author Nigel Peace is going to read from his new novel Broken Sea (www.local-legend.co.uk, on sale from 14th August) which centres on those events; Professor Robert Aish, who as a student witnessed and photographed the invasion in Prague, will share his reminiscences and his photographs. Ivan Hartel, a poet and one of the leaders of the student resistance during the Prague Spring, will describe his experience and read a poem devoted to those days. And we shall hear from those of you who are willing to tell us about your memories of those days – or even of your parents or grandparents. Join us and listen to history coming alive.

Light refreshments will be served

Free admission for members of the BCSA, £10 for non-members, full time students £5. Registration is necessary for all on Eventbrite: https://www.eventbrite.com/e/anniversary-of-1968-invasion-remembered-tickets-48310112848   or by e-mail tobcsa@bcsa.co.uk