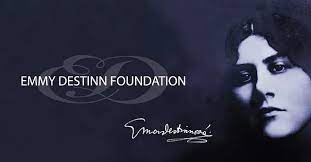 After a long absence, music resounded once again at Velehrad, London. On 30th June 2021, the Emmy Destinn Foundation held a Singing in Czech workshop, with just a handful of singers. It was an absolute joy to hear live music and singing again and we are very grateful to Ludmila Stane and Velehrad for allowing us to hold it in their wonderfully acoustic Czernin Hall.

This was our fourth workshop but due to the Covid 19 restrictions in place, we were able to select only four singers and a pianist, as oppose to the usual eight. We were all appropriately distanced and there was ample ventilation in the room.

Our workshops provide an opportunity for singers of all voice types to work on their knowledge of the Czech language as well as on their interpretation of the Czech repertoire. Our main focus is on the singers’ diction, vocal interpretation, breathing and audition preparation of selected arias. There is group work as well as solo slots. Yvette Bonner ARAM, who was our inaugural prize winner in 2000, is not only a brilliant singer but also an excellent and experienced vocal coach, who teaches at
the RAM.

In the first half of the day, Karel Janovický and myself concentrated on the Czech alphabet and phonetics and subsequently taught the singers two short songs by Leoš Janáček from his album Nursery Rhymes (Říkadla), which they all sang together.

In the afternoon, the participants performed their chosen repertoire, expertly coached by Yvette. The four talented sopranos, Caroline Blair, Catherine Hooper, Arabella Lewis and Marrianne Town Smith chose a wonderfully varied repertoire to work on. Songs from Dvořák’s Cypresses, Love Songs and Gypsy Songs and arias from The Cunning Little Vixen, Rusalka, The Bartered Bride and Jenůfa. They were sensitively accompanied by Raya Kostova, winner of the Accompanist’s Prize
(supported by Lady Grenfell-Baines), at the Emmy Destinn Young Singers Awards in
2019.

It was a wonderful, uplifting day, working with these talented singers and one which we cannot wait to repeat.

Our next event will be the 12th Emmy Destinn Young Singers Awards, with the Final on 26th November 2021, at Velehrad.