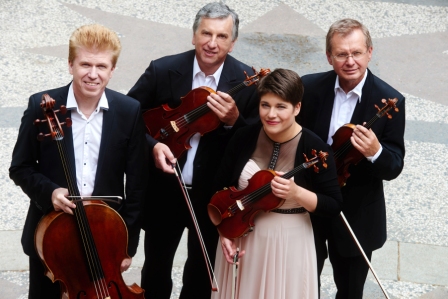 The Trustees of Velehrad London invite you to
A concert given

by one of today´s leading international chamber music ensembles

HOW TO GET TO VELEHRAD:

Nearest underground is Hammersmith and then 15 min walk (Hammersmith bridge is currently closed to traffic).
Alternative route is by train from Waterloo to Barnes and then bus 419 (it takes about 5 min and goes along Lonsdale Road and stops
outside Velehrad) or bus 33 (which stops at Castelnau, at the end of Lonsdale Road).
Barnes station is in travel zone 3; and the train journey from Waterloo takes about 20 minutes.

>>>>>>>>>>>>>>>>>>>>>>>>>>>>>>>>>>>>>>>>>>>>>>>>>
The Pražák Quartet was formed in Prague in 1972, and quickly established itself as one of the leading
quartets in the world, touring all over Europe, North America, and Asia. They have also recorded extensively,
with over 30 award-winning CDs to their name. In 2015, they chose a new leader, Jana Vonášková, a
graduate of the Royal College of Music.
After two years of intensive study re-learning the repertoire in its new line-up, the quartet has once again
taken to the international stage with great success.  The spirit, freshness and agility of youth combine with
the extensive experience of the ensemble’s founder-members to produce a renewed sound and energy and a
sense of unity and togetherness that is truly remarkable. World tours to the United States and Japan and
performances in Europe have been greeted with enthusiasm and numerous invitations.