I hope you are keeping well and sane. Here is something that has just raised my spirits, and may well do the same for yours.

This morning I received a message from Petr Kadlec, the Czech Philharmonic’s Head of Education about a video they have just released on YouTube. This is a “commented concert” given by the excellent Czech Student Philharmonic, joined by the bands of the Prague Castle Guard and the Czech Police. It starts with 45 minutes of entertaining analysis of Janáček’s Sinfonietta given by Petr Kadlec and the conductor Marko Ivanović in the Rudolfinum. There is participation by the audience and members of the orchestra, and a wonderful recorded recollection of how Janáček collected folk songs; all this is in Czech, with English subtitles. Then there is a complete performance.  The whole video lasts 73 minutes, with the performance starting at 48 minutes. The link is given below – give yourself a treat!

In commemoration of the 75th anniversary of the end of the Second World War, the Embassy of the Czech Republic in London organises its flagship project ‘Never Forgotten’. In the year 2020, Ambassador Libor Sečka will visit all military cemeteries and memorials to Czechoslovak airmen and soldiers, who lost their lives during their service in the United Kingdom in the Second World War. The Ambassador will place a flower in memory of the deceased on each of the graves.

For more information about the project, please follow this link. 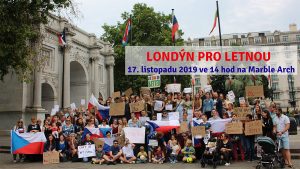 17th November is an important date for Czechs as well for Slovaks, for those at home and abroad. We celebrate the 30th anniversary of freedom in the Czech Republic and Slovakia. It is amazing that we can freely meet and commemorate the Velvet Revolution. It is not so much amazing that we are meeting in order to protest against the state of democracy in our countries. We support “Milion chvilek pro demokracii” and therefore our gathering takes time at the same day as the demonstration in Prague.  #letnalondon

If you want to create your own transparent, please come at least a half an hour earlier for the “DIY workshop”. #letna_v_zahranici

Tomáš Halík’s autobiography From the Underground Church to Freedom has been published in English by Notre Dame University Press.  Here is a link where you can find more information:

You can find below a selection of reviews the autobiography has already received in the American media.  This publication in English joins the previous publications in German and Portuguese, and there is an upcoming edition in Dutch, Polish, etc.  as well.

“This is a remarkable book. But then Tomáš Halík is a remarkable man. From the Underground Church to Freedom is engagingly written and articulate; it is the story of an apostle very much of our time. People of all convictions today will understand where he is coming from, even those who end up very far away from him.”

“Tomáš Halík’s From the Underground Church to Freedom is one of the most fascinating books of a thoughtful reflecting witness of our times. He tells his experience of the troubled history since the second half of the last century seen through the eyes of a Czech priest and internationally renowned philosopher and theologian. It is a journey of experimental questioning and ongoing dialogue with many well-known witnesses of our times, a journey through all the darkness of the Marxist epoch, the hopes during the spring of Prague that turned to winter, the new Exodus with great expectations but also challenges and temptations during and after the Second Vatican Council, the collapse of Communism, and the blasts of wind and storms in our globalized world and within the present Church itself. This moving remembrance ends with an almost mystical outlook and journey to eternal silence. A book of rich life experience, wise discernment of the signs of the times, and hopeful outlook out of faith.”

“In this warm, reflective, and ultimately uplifting book, Tomáš Halík, with deep wisdom and a light touch, weaves the story of his life, his spiritual journey, and the emergence of the modern Czech Republic into a compelling narrative. Turner’s translation admirably captures Fr. Halík’s rare combination of gentleness and steel.”

“It is possible that Halík is the most thoughtful, learned and interesting Catholic that is widely unknown in the United States today. Hopefully, this book will right that wrong.”

“With eloquent sensitivity, Tomáš Halík, a clandestinely ordained Roman Catholic priest, pulls back the Iron Curtain to illuminate a dark period of Czechoslovakian history. From the Underground Church to Freedom is a memoir enfolded with spiritual wisdom, incisive and frank in its assessment of Halík’s life and of the continuing narrative of the church universal as she has moved into the twenty-first century. . . . Poignant and profound, this book is a needed reminder that hope springs eternal even in the face of overwhelming evil.”

“Tomáš Halík has been a prolific writer of theology, political commentary and analysis, and spiritual advice for more than thirty years, and he was of considerable importance in shaping the transition of the Czech Church after 1989; in addition, he was among John Paul II’s close associates. His book is vivid, entertaining, and has a compelling storyline. From the Underground Church to Freedom will find a wide readership.”

30 years ago, the events of 1989 redrew the political map of Europe, affecting the lives of millions. Looking at those historical moments and their aftermath from today’s perspective what role did the year 1989 play in your life? Do you have an experience or a memory of 1989? Maybe you immigrated to the UK, maybe you have family memories, maybe you have another story to tell. WHATEVER IT IS, WE WANT TO HEAR IT!

Tomáš Halík’s books are now available in English translation by Gerald Turner. From the Underground Church to Freedom and I Want You to Be were published in Notre Dame Press. You can find more information in the leaflets below.

Halik – I Want You to Be

Halik – From the Underground Church to Freedom

There was a traditional Easter celebration at Okénko on Saturday 30th March. Many children and their parents came along and enjoyed traditional food, dance, songs and other Easter traditions.

an Kennaway’s 80th Birthday at Velehrad

Ian Kennaway, the founder of the charity Friends of Czech Herigate, celebrated his 80th birthday on Saturday 7th July at Velehrad.

Ten-year anniversary of the Slovak Catholic Mission in London 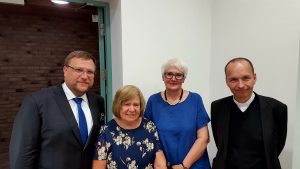 On Sunday the 1st of July, the Solemnity of St. Cyril and Methodius was celebrated at the Slovak Catholic Mission at London Bridge. Bishop Jozef  Hal’ko from Bratislava presided the Holy Mass, marking also the 10 years of autonomy of the Slovak Catholic Mission (SCM). His Excellency the Ambassador of Slovakia and the Slovak Military Attaché were among the invited guests. Velehrad in London, where Slovak and Czech Masses were celebrated for many decades prior to the Slovak Mission moving to the church in Melior Street, was represented by a Trustees Mrs Marta Tomsky and the Hon. Secretary Mrs. Ludmila Stane (viz photo JE L. Rehak, M. Tomsky, L. Stane, bishop Jozef Hal’ko) 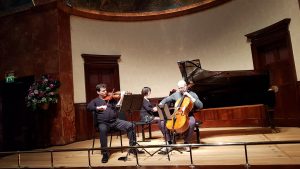 Smetana Trio, reinvigorated with new Violinist, Radim Kresta, perform a masterclass in Czech Chamber Music. Every time a musical ensemble steps out onto a stage there is an act of courage involved – each performance is a new venture. For the Smetana Trio, the excitement of that venture was enhanced at the Wigmore Hall’s Morning Coffee Concert today owing to the fact that this was their first public performance in the UK in their new configuration, with violinist Radim Kresta joining the powerhouse partnership of pianist Jitka Čechová and cellist Jan Páleníček. All the more impressive, then, that the Trio succeeded in reinvoigorating the souls of a Sunday-morning audience in a tired-out Capital, reeling from the mayhem of the week. Read more.

Tomáš Halík’s Book I Want You To Be 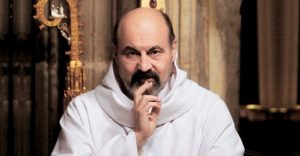 I Want You To Be is a finalist for the 2016 Foreword INDIES book of the Year Award in the Adult Nonfiction, Philosophy category. The winners will be announced during the American Library Association conference, June 22-27, 2017, in Chicago. Here is a link to the announcement: https://awards.forewordreviews.com/finalists/2016/philosophy/ 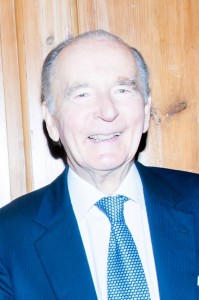 IT IS WITH GREAT SADNESS TO ANNOUNCE THAT COUNT JOSEPH CZERNIN, PATRON OF “VELEHRAD LONDON”, DIED ON MONDAY THE 13TH OF APRIL 2015. R.I.P.Joseph Czernin was born in Prague in 1924 to one of the oldest Czech noble families. During the Nazi occupation of the Czech Lands, he was forced to work in Germany. After the war, he studied law in Prague and in 1947 he came to the United Kingdom to study English. After the communist coup of February 1948, he decided to stay in England permanently. From the very beginning, he got involved in the organisation of the social and religious life of Czech and Slovak immigrants. His commitment to the charity Velehrad dates back to 1950´s. He was a longtime and tireless advocate of the preservation of the Czech language, culture and traditions in the UK. May he rest in peace.